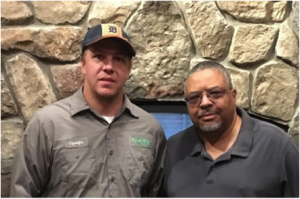 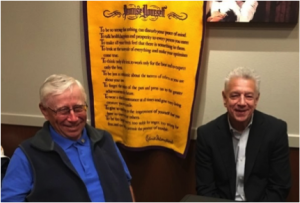 Dave Geiger, Mundy Township Supervisor and former police chief, updated us today on the developments and status of various regional collaborative ventures, including improved communication and collaborative coverage among first responders like the Metro Police Authority (http://www.metropolicegc.org/). Swartz Creek, Mundy, and, to some extent Gaines, are already cooperating and some Grand Blanc governmental organizations are while others are more reticent. The increased stabilization and collaboration has allowed 5 hotels to move into Mundy Township, with 2 more coming, all in a 1.5 mile radius; a single new restaurant now services the area, so there is considerable opportunity for new development. Construction of the Miracle League  (http://www.miracleleague.com/) ball field continues, and a plan to extend Taylor Drive and creation of more convenient and safer traffic patterns and regulation are planned in the “Hill Road/I-75 overpass” area. These are quite large projects for an area with 15,000 residents!

For his first Presidential meeting, Crys Reed rang the meeting to a semblance of order, asked Jack Proffitt to say grace after Dan Crannie led in the Pledge to the flag, and sold the Crown very cheaply to Jack Proffitt. Jack Medemar returned to his ruthless Tailtwister role, collecting many fines from the 25 members present. After George Kitchen paid one for waiting for Patrick Naswell before coming into the meeting, Crys suspended the fines for a a few moments and passed the floor to Past Prez Peter Venos to have him announce the Ron Polsgove Award to Jeff Dennings and the Charlie Gafney Award to Jack Proffitt for their exemplary service and officially welcoming and installing new member Bill Reaves. When fines resumed, President Crys paid (twice) for losing control of the meeting (“Houston, I think we have a problem!”), Past Prez Pete paid for placing his pedestrian posterior in the position of “just another butt in the seat”, thanks to Mic Goulet. Jack Proffitt, who brought guest Sim Clime, fined the rest of the Club for coming without guests, and other fines escaped into the ether in the wash of animated conversations before Bill Reaves finally got his breakfast and a “50/50” ticket. The ticket did him no good when Bill Hentgen again won the drawing. Jeff Dennings attended “The Cage” meeting of a Community Mission Board, noting that there are programs for blue jeans donation, kids’ clothing with a “parent-free” shopping option, food rescue, etc., and that United Way has developed a website page for connecting with volunteer and project opportunities (http://www.geneseeserves.org/need/). Mic Goulet reported that the Walt Widder Golf Classic generated roughly $8,000 for the Club and that Walt’s sons deserve our expressions of gratitude and appreciation for their generosity and support. The Board was reminded of next week’s Board Meeting at Dan Crannie’s business, and Jim Reigle noted the 6 remaining unclaimed “5K Raffle” tickets and requested that money be turned ASAP because he is losing sleep. Nonetheless, Jim was able to lead in the recitation of the Creed:

There are no upcoming events at this time.